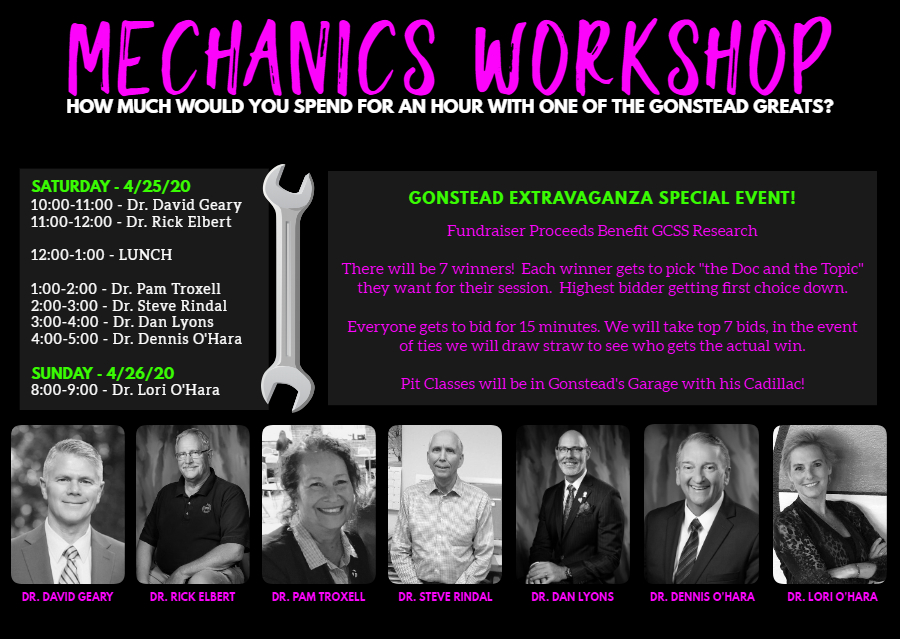 What would you pay for a one hour, 1 on 1 pit class with Dr. Gonstead??? Honey, call the bank, we need to mortgage the house because— it’s time to learn!

Well we’re gonna auction off the next best thing! A one on one Pit class with one of these amazing and talented Gonstead docs at the next Extravaganza.

We have Denny O’Hara’s 4 camera system so we can film the session for your review, Dr. G's polished garage and Cadillac, and a set of Gonstead equipment . . . Bidding starts at $100. The 1 hour session will consist of you, the doctor, and a patient.
There may even be a photo op with Dr. G. Win your auction bid and have your name included on the Mechanics Workshop wall of fame!

Read about your Mechanics Workshop Instructors:
Dr. Rick Elbert graduated from Palmer in December of 1977. He started his journey in Gonstead chiropractic by attending ten seminars at Mt Horeb while at Palmer, and was adjusted by Dr. Gonstead at one of those seminars. Dr. Elbert was a Gold Coat intern at the Palmer Clinic the last 6 months he was there and interned with Dr. Larry Troxell for a year, where he was head intern on Monday night for the last 6 months. While at Palmer, he wasted no time, and patented a Back Support Air Ride Truck Seat before graduation. Dr. Elbert has taught Gonstead seminars since 1979, and is probably on more GAT/GMI seminars teaching videos than any other instructor teaching Dr. Gonstead's work. He practiced in Ames, Iowa for over 33 years, and has been in practice in Ogden, Iowa for 9 years. He is a recipient of the GMI Lifetime Achievement award. In his free time, Dr. Elbert enjoys hunting deer and elk, working on his model railroad, and riding his bicycle in both Iowa and Colorado. He enjoys vacationing with his wife in the Colorado and New Mexico high country on a yearly basis.

Dr. David Geary earned his Doctor of Chiropractic Degree from Northwestern College of Chiropractic in 1991 and founded Valley Chiropractic Associates the same year and has remained in private practice for 29 years. He spent his internship in Laurel, Montana while training under Dr. Gary Pfaff. He is an adjunct professor at Northwestern Chiropractic College in the Clinical Preceptor Training Program, where he educates and trains chiropractic interns. Dr. Geary is a current Board Member and President of the Gonstead Foundation; Advisor Board Member for the Sweere Center; past Board Member and President of the Gonstead Methodology Institute and current Board Member of the Gonstead Clinical Studies Society where his is a lecturer and instructor on adjustive technique and case management. Dr. Geary holds diplomatic status with the GCSS organization and travels internationally to speak and instruct. He holds a post graduate degree from NWCC in Spinal Trauma enabling him to manage and effectively treat traumatic injury conditions. He is happily married and has four wonderful children and is where and how he spends his leisure time.

Dr. Pam LeRoux-Troxell is a Life Sigma Phi Chi member, who started her Gonstead chiropractic studies as a Troxell intern in 1972. She practiced in the Republic of South Africa from 1973-1986, holds a diplomate in pediatrics (1995-1997), completed an addiction diplomate (2018), and is a graduate of Croft Whiplash Studies (2005). She also held the position of Minister of Health in Edson, TN in 1996. Dr. Pam served on the GMI board for three years, is a part of numerous chiropractic associations, and still serves others through Tanaka Chiropractic Missions (2018, 2019, 2020). She received the Chiropractic of the Year award in both 1995 and 2010. Dr. Pam always had a family practice and loved treating all ages and types of conditions, knowing that the body will do so much better with anything that comes its way by removing subluxations! Her oldest patient was 104, and her youngest patient was just hours old. She loves teaching effortless adjusting. Her most incredible mentor and love of her life was her precious Dr. Larry J. Troxell, who was her rock and inspiration!

Dr. Dan Lyons graduated from Palmer College of Chiropractic Davenport in 1996 and has been in full-time private practice for 24 years. In 1997 he became the executive director of GMI and an instructor. Since that time he has taught hundreds of seminars and workshops across the globe. He has been recognized by GMI has their chiropractor the year and with the Marcus Schulke award. He was part of the first class to receive his Legion of chiropractic philosopher (LCP) distinction as well as his Diplomate in Philosophical Chiropractic Standards. He has served as the GMI president and currently serves on the boards of GMI, GCSS and the Center for Chiropractic Progress. He enjoys teaching all of the Gonstead work, particularly analysis and x-ray as well as philosophy. Currently he practices in Green Bay Wisconsin where he enjoys spending time exploring new towns and restaurants with his family and, of course, singing karaoke.

Dr. Dennis O'Hara is a 1981 graduate of Palmer Chiropractic College. While in college he participated in the Five Points Intern Program and interned for Dr. Larry Troxell and Dr. Herb Wood. After graduation he practiced for three years in Santa Clara, California with Dr. Pete O'Hara. During that time, he was a Gonstead Instructor at Life West Chiropractic College. Since 1985, he has been in practice in Waterloo, Iowa. He currently serves on the board of the Gonstead Foundation, and the Gonstead Clinical Studies Society, and is a past board member of Gonstead Methodology Inc. He is a member of the Gonstead Research Society and the Society for Neuroscience. Dr. O'Hara is a Gonstead Fellow and receive Lifetime Achievement awards from GMI and GCSS. Dr. O'Hara has taught Gonstead Technique with GAT, GMI, GCSS, and anyone else who would allow him to speak. "I think the Mechanics Workshop is a great idea, I have always done my best work in the garage."

Dr. Lori O’Hara graduated from Life Chiropractic College – West in 1987. After graduation, she was a chiropractic associate with Dr. Frank Young in Walnut Creek, but her ongoing mentor has been her husband, Dr. Pete O’Hara. She has been in private, solo practice in Goleta / Santa Barbara, California since 1988. She is straight Gonstead, no compromising, principled, passionate, and fun, with educated patients. In addition to her commitment to excellence in chiropractic technique, Dr. O’Hara believes in excellence in the business side of practice as well. Her clinic is a well-oiled machine – high volume, low overhead, all cash, 100% collections with payment ahead or at the time of service. She also has the very best, well-trained employees, who share her vision. She teaches Gonstead seminars at Life-West quarterly and mentors Gonstead students on an ongoing basis. Her passion for chiropractic is evident by the forty-three patients she has referred to chiropractic school over her thirty-three years in practice! Dr. O’Hara believes the best is yet to come!

Dr. Steven Rindal was on his college path to become an MD until a ruptured L5 disc brought him to chiropractic. He graduated Summa Cum Laude in 1972 from Palmer where he was Class President and Valedictorian. At Palmer he totally embraced chiropractic philosophy and Dr. Larry Troxell, the Gonstead class instructor, encouraged him to go to Mt. Horeb. After the first two seminars one was allowed to go to Dr. G’s class who then called on him to show how to adjust an ASEX ilium on a field doctor. He had no idea how to and Dr. G graciously walked him through the process, smiled at the end and made him look good. That set his course on a path that has never stopped. He became a Certified Instructor for Gonstead Advanced Technic, Inc. right after Dr. G passed away. He received the Outstanding Accomplishment Award from Gonstead Advanced Technic, Inc. 1978-1979, National Gonstead Research Society Humanitarian Award 1981 and was a National Gonstead Research Society Charter Member, 1978. He continues as an instructor of advanced Gonstead methods at various venues and through Rindal Seminars, Inc. He is a GCSS Fellow, past President of the College of Fellows and past GCSS Board Member. He is the inventor and producer of the ComboBench® table since 1988 and also produces advanced Knee Chests. He is the inventor of a patented x-ray machine that is now in the prototype development phase.

Posted in News
Scroll To Top
Change Location
Find awesome listings near you!